Arabian Nights – The Restless One 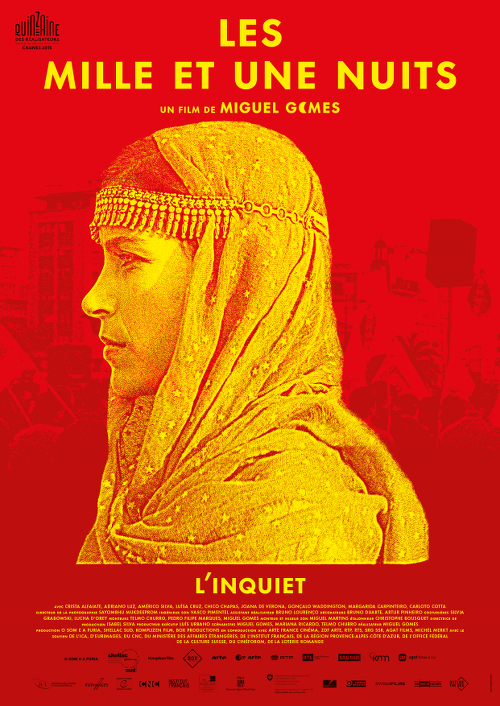 In Portugal – one European country in crisis – a film director proposes to build fictional stories from the miserable reality he is immersed in. However, failing to find meaning in his work, he cowardly runs away and leaves the beautiful Scheherazade to stand in his shoes. She will require enthusiasm and courage so as not to bore the King with sad stories of this country! As nights go past, restlessness leads to desolation and in turn to enchantment. Therefore Scheherazade organises the stories she tells the King in three volumes. She begins like this: “It hath reached me, O auspicious King, that in a sad country among all countries…”.

Volume 1, The Restless One

In which Scheherazade tells of the restlessness that befell the country: “It hath reached me, O auspicious King, that in a sad country among all countries, where people dream of mermaids and whales, unemployment spreads. In certain places, forests burn into the night despite the falling rain; men and women long to set out to sea in the middle of Winter. Sometimes there are animals that talk although it is highly improbable that they are listened to. In this country, where things are not what they appear to be, men of power promenade on camels and hide permanent and shameful erections; they await the moment when taxes are collected so they can pay a certain wizard whom…”. And seeing the morning break, Scheherazade fell silent.

Miguel Gomes, Lisbon, 1972. Studied Cinema. Film critic between 1996 and 2000. He directed several short films. THE FACE YOU DESERVE (2004) is his first feature. OUR BELOVED MONTH OF AUGUST (2008) and TABU (2012) have confirmed his success and international projection. TABU has been released in about 50 countries, and won dozens of awards.

Retrospectives from Miguel’s work have been programmed at the Viennale, the BAFICI, Torino Film Festival, in Germany and the USA.

ARABIAN NIGHTS, a three-part feature film, premieres in 2015 edition of the Directors Fortnight in Cannes.